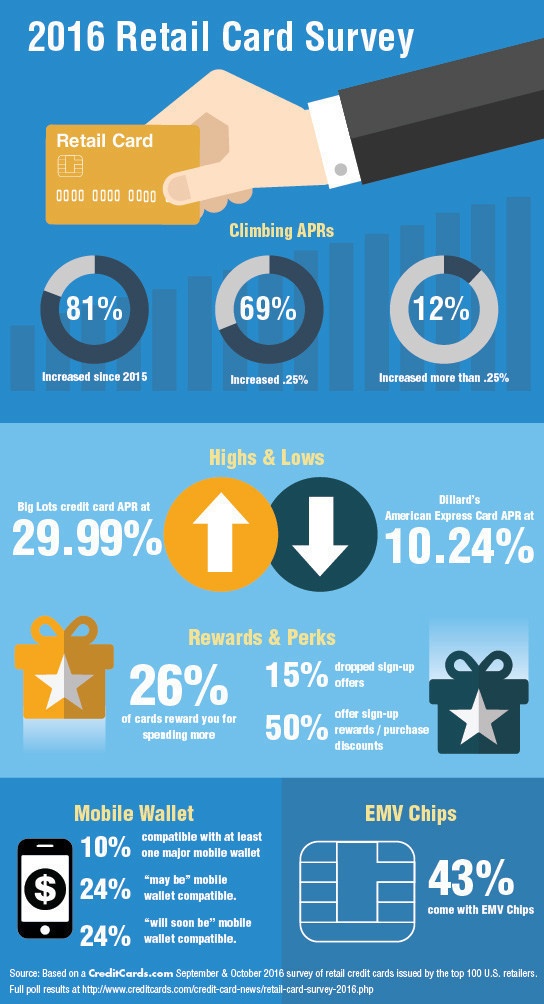 The average store card charges 23.84 percent, much higher than the national average for all credit cards (15.22 percent). Retailers get customers to sign up for these cards by offering incentives, but the deals aren't very generous. For example, while half of the credit cards offered by the nation's 100 largest retailers give new cardholders a sign-up bonus, only 13 exceed $25 for a $200 purchase.

17 of the sign-up bonuses are calculated as a percentage, so they might make sense for large purchases. For example, Best Buy's 10 percent sign-up bonus would be worth $100 to someone who buys a $1,000television. But the benefit would be lost – and then some – unless the cardholder pays the entire bill before interest starts to accrue.

"With their outrageously high APRs, most consumers would be wise to steer clear of these cards unless they're 100 percent certain they can pay their balance off every single month," said Matt Schulz, CreditCards.com's senior industry analyst. "And even then, there are plenty of general-purpose credit cards with better sign-up bonuses."

Almost all of these store cards offer rewards for ongoing spending. As with sign-up bonuses, many of the rewards pale in comparison to those offered by general-purpose cards, although they could make sense for frequent shoppers. Case in point: Someone who spends a lot at Target would benefit from its 5 percent cash-back program since the best general-purpose cash-back cards yield about 2 percent.

The Military Star card from the Army and Air Force Exchange Service charges the lowest flat rate among retail cards (10.49 percent). Some Dillard's American Express cardholders qualify for a slightly lower rate (10.24 percent), but that can climb as high as 25.24 percent depending on creditworthiness.

Over the past year, the Federal Reserve raised its benchmark interest rate by 0.25 percent and the average store credit card interest rate rose by 0.41 percent. The Fed is expected to take a similar action in December; that will likely push store card rates even higher.