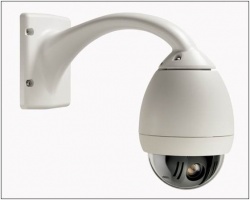 AutoDome cameras equipped with Intelligent Tracking present a major asset to overall surveillance, supporting security personnel with a powerful automated monitoring system to ensure targets’ activities are not missed. With this feature, customers can use the IVA from Bosch to stipulate tasks or conditions that will instantly activate tracking. For example, the camera can be programmed to follow vehicles that move through an area in a specific direction. Operators can also trigger tracking of objects by clicking on a moving target within live video to prompt the camera to keep it in a scene with pan, tilt or zoom actions.

Using an advanced algorithm, the AutoDome 700 series IP dome with Intelligent Tracking outperforms other moving cameras, as it will resume tracking a target after it passes behind a privacy mask or if it is temporarily concealed by a stationary object. AutoDome continuously tracks the target when it reappears or if motion is detected along the same trajectory.

AutoDome 700 series IP cameras provide 360-degree continuous rotation, 28x or 36x optical zoom and progressive scan digital imaging for sharp video even when moving objects are present. The cameras also feature a rugged, tamper-resistant aluminum housing that is rated to IP 66 for uncompromised functionality even in dusty and wet environments.