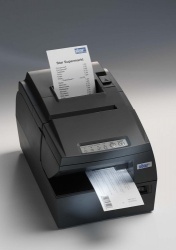 Since the demise of the cheque retailers have devised profit-making ways to use their two station cheque printing technology from completing jewellery insurance forms to long, detailed store credit card forms.

With a print resolution of 203dpi, the HSP7000 provides superior quality logo and barcode receipt output. Although cheques are no longer accepted by a number of major retailers, this printer has a wide range of additional applications that offer a low cost means of generating additional revenue. Providing accurate form completion with high speed output, this printer is ideal for retailers offering product insurance cover and extended warranties (with up to 4 copies available). Furthermore, the HSP7000 provides the facility for the completion of store card application forms as well as the validation/endorsement of gift vouchers.