Unemployment on the rise again 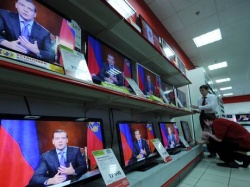 Receipts at merchants rose 3.8 percent from a year earlier, the slowest pace since February 2010, after a 4.4 percent increase in September, the Federal Statistics Service in Moscow said in an e-mailed statement today. The median forecast of 16 economists surveyed by Bloomberg was for 4.5 percent. The jobless rate rose to 5.3 percent from 5.2 percent.

Faltering domestic demand poses risks to the world’s largest energy exporter, which has relied on household confidence to insulate the economy from Europe’s debt crisis and slowing growth in China. Smaller gains in consumption are also hurting companies such as X5 Retail Group NV (FIVE), Russia’s largest food retailer by sales, which today reported third-quarter profit that missed analyst estimates. The economic figures “can be linked to slower growth in incomes, wages and a relatively high level of the inflation rate,” said Alexander Morozov, chief economist for Russia at HSBC Holdings Plc in Moscow..

Russian equities fell, heading for the biggest drop in a week, with the Micex Index losing 0.3 percent to 1,393.99 by 5:47 p.m. in Moscow. The ruble is the top performer among more than 20 emerging-market currencies tracked by Bloomberg today, gaining 0.5 percent against the dollar.

“The Russian consumer’s financial position deteriorated further in October,” Johannesburg-based Tradition Analytics said in an e-mailed research note. “It is evident that rather prominent inflationary pressures are weighing on the consumptive sector as inflation eats into the disposable income of consumers.”

The pace of price growth has surged past the central bank’s target of 5 percent to 6 percent this year, forcing policy makers to raise interest rates in September. The inflation rate unexpectedly fell to 6.5 percent last month from a year earlier, compared with 6.6 percent in September. Real average wages increased 5.2 percent in October from a year earlier, missing the median estimate of 6.1 percent, the service said. Disposable incomes advanced 2.4 percent, below economists’ forecast for 4 percent growth.

“The acceleration of investment is seasonal and relates to the fact that toward the end of the year investment programs are implemented more actively,” said Dmitry Kharlampiev, director for macroeconomic research at OAO Petrocommerce Bank in St. Petersburg.

The economy seems to be in a good place

Trade war could become a ‘turning point’ in confidence

B-Air welcomes retailing expert Gordon Erickson to its board

B-Air’s blue-chip partnerships with valued distributors and retailers, such as The Home Depot, Amazon, Menards and Costco